Origins of "The Flying Dutchman" legend

Origins of "The Flying Dutchman" legend.

As we wrap up the 2011-12 opera season and prepare for another exciting year of new productions of classic operas, I am writing a series of essays on Wagner and his mythological subjects. Essays on Wagner's Ring are below, following my recent sojourn to the Met for their last "Ring Cycle" of the current season. Since our upcoming fall production of The Flying Dutchman is the first Wagner staging we've undertaken in our 37-year history, it is a momentous occasion.

This entry is in two parts. The first lists literary references to the origins of "the flying Dutchman" legend. The second part looks more closely at Edgar Allan Poe's "ghost-ship" story, "MS. Found in a Bottle."

A quick Internet search leads one to many references of the origins of the “ghost ship” frequently called “the Flying Dutchman.” Wagner’s opera is the most famous, and the Disney film franchise, “Pirates of the Caribbean” the most recent popular adaptation of the timeworn tale. Wagner's opera is most directly based on Heinrich Heine's satirical story, "The Memoirs of Mr von Schnabelewopski." Also of interest from the great German Jewish writer is his
Reisebilder: Die Nordsee (Travel Pictures: The North Sea).

The first credited reference to the mysterious ghost ship is found in George Barrington's 1795 account, "A Voyage to Botany Bay."

I had often heard of the superstition of sailors respecting apparitions, but had never given much credit to the report; it seems that some years since a Dutch man of war was lost off the Cape of Good Hope, and every soul on board perished; her consort weathered the gale, and arrived soon after at the Cape. Having refitted, and returning to Europe, they were assailed by a violent tempest nearly in the same latitude. In the night watch some of the people saw, or imagined they saw, a vessel standing for them under a press of sail, as though she would run them down: one in particular affirmed it was the ship that had foundered in the former gale, and that it must certainly be her, or the apparition of her; but on its clearing up, the object, a dark thick cloud, disappeared. Nothing could do away the idea of this phenomenon on the minds of the sailors; and, on their relating the circumstances when they arrived in port, the story spread like wild-fire, and the supposed phantom was called the Flying Dutchman. From the Dutch the English seamen got the infatuation, and there are very few Indiamen, but what has some one on board, who pretends to have seen the apparition.

The next literary reference, according to another online source, introduces "the motif of punishment for a crime." This appears in John Leyden's Scenes of Infancy (Edinburgh, 1803)

It is a common superstition of mariners, that, in the high southern latitudes on the coast of Africa, hurricanes are frequently ushered in by the appearance of a spectre-ship, denominated the Flying Dutchman ... The crew of this vessel are supposed to have been guilty of some dreadful crime, in the infancy of navigation; and to have been stricken with pestilence ... and are ordained still to traverse the ocean on which they perished, till the period of their penance expire.

The Irish poet, Thomas Moore (1779–1852) is best known for popular lyrics like "The Last Rose of Summer." I share Britten's settings of his folksongs frequently in my "Listening to Paintings" series at the Taubman Museum of Art. The colorful and not infrequently visionary imagery of his poetry lends itself to visual associations. In a poem whose title is a chronicle in and of itself, he describes a phantom ship on the North Sea. "Written on passing Dead-man's Island in the Gulf of St. Lawrence, Late in the Evening, September, 1804," describes her:

Fast gliding along, a gloomy bark
Her sails are full, though the wind is still,
And there blows not a breath her sails to fill.

A footnote adds: "The above lines were suggested by a superstition very common among sailors, who call this ghost-ship, I think, 'the flying Dutch-man'."

Sir Walter Scott (1771–1832) was not only a friend of John Leyden's, like Edgar Allen Poe, he was a romantic writer of Gothic, supernatural fantasy. His Bride of the Lammermoors is best known for inspiring Donizetti's bel canto masterpiece, Lucia di Lammermoor (heard to acclaim in Roanoke in 2010). Scott may have been the the first to refer to the vessel as a pirate ship. Notes to his 1812 poem Rokeby, say the ship was "originally a vessel loaded with great wealth, on board of which some horrid act of murder and piracy had been committed." He goes on to warn this pirate ship "is considered by the mariners as the worst of all possible omens."

Samuel Taylor Coleridge's 1799 ballad, "The Rime of the Ancient Mariner," may be the most famous of the ghost-ship references, with its lexicon-forming imagery of "water water everywhere / and not a drop to drink" and the archetypal "albatross" hung around the neck of the ill-fated Mariner who shot her down. Coleridge's poem will be considered later. Before we move on to a closer examination of Edgar Allen Poe's 1833 tale of nautical phantasmagoria, "MS. Found in a Bottle," mention should be made of several other ghost-ship references.

Best known for "The Legend of Sleepy Hollow," the American romantic author Washington Irving, indebted to Moore's poem, wrote both "Bracebridge Hall" (1822), and "The Flying Dutchman on Tappan Sea (1855).

In 1826, the English playwright, Edward Fitzhall wrote The Flying Dutchman; or the Phantom Ship: A Nautical drama. Frederick Marryat's novel, The Phantom Ship appeared in 1839. 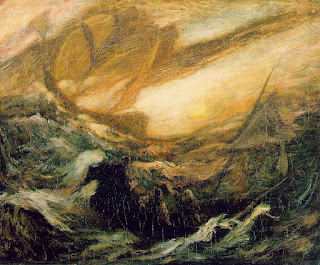 (Albert Ryder's 1887 canvas, "The Flying Dutchman," from the Smithsonian Museum)

A closer reading of Poe's "MS. Found in a Bottle."

In the middle of a tumultuous storm, “at an elevation beyond the albatross,” fearful of disturbing “the slumbers of the kraken,” Poe describes his narrator’s first glimpse of the ghost ship:

We were at the bottom of one of those abysses, when a quick scream from my companion broke fearfully upon the night. “See! see!” cried he, shrieking in my ears… As he spoke I became aware of a dull sullen glare of red light… I beheld a spectacle which froze the current of my blood. At a terrific height directly above us, and upon the very verge of the precipitous descent, hovered a gigantic ship of perhaps four thousand tons… Her huge hull was of a deep dingy black… For a moment of intense terror she paused upon the giddy pinnacle as if in contemplation of her own sublimity, then trembled, and tottered, and – came down.

Poe’s companion does not survive the fateful encounter, but his narrator finds himself on the phantom ship among the mysterious crew, who “seemed utterly unconscious” of his presence.

We are surely doomed to hover continually upon the brink of eternity, without taking a final plunge into the abyss. From billows a thousand times more stupendous than any I have ever seen, we glide away with the facility of the arrowy sea-gull; and the colossal waters rear their heads above us like demons of the deep…

Poe foreshadows the appearance of the Captain and reinforces the parallels with the “Flying Dutchman” legend. As his narrator proofreads the account he is chronicling, “a curious apothegm of an old weather-beaten Dutch navigator comes full upon” his memory. “’It is as sure,’ he was wont to say, when any doubt was entertained of his veracity, ‘as sure as there is a sea where the ship itself will grow in bulk like the living body of the seaman.’”

I have seen the captain face to face, and in his own cabin – but, as I expected, he paid me no attention… But it is the singularity of the expression which reigns upon the face – it is the intense, the wonderful, the thrilling evidence of an old age so utter, so extreme, which excites within my spirit a sense, a sentiment ineffable. His forehead, although little wrinkled, seems to bear upon it the stamp of a myriad of years. His gray hairs are records of the past, and his grayer eyes are sybils of the future.

Poe’s superb ear for conjuring phantasmagoria is apparent across this compact story, “imbued with the spirit of Eld,” like the ship and its crew. They “glide to and fro like the ghosts of buried centuries.” And like Poe's narrator, we are drawn in by a strange attraction, an uncanny fascination. Close reading of Poe opens up the creative space where intellect and intuition, history and fantasy, “truth” and “fiction” meet and unite. Most modern forms of fantasy concentrate on external effects for “entertainment” value. This exoteric, special effects-driven approach is most obvious in Hollywood films. To cite one example, the director Guillermo del Toro’s comic-book fantasy film, Hellboy plays to the typical summer blockbuster audience, skimming over the mythic layers inherent in the genre to relish in special effects and “epic” battle scenes. His vastly superior film of historical and archetypal resonance, Pan’s Labyrinth was an art-house, “foreign language” favorite (in Spanish). Its nature is truly epic, its “fantastic” elements deeply layered, and its violence is all the more unsettling for not being gratuitous.

Poe, like Coleridge and Blake, belongs to a lineage of esoteric creative artists deeply connected to mythologies and the transformative power of the “fugitive causes” (Coleridge) behind and within inspiration. (Coleridge’s famous ballad “The Rime of the Ancient Mariner,” is another “ghost ship” reference and will be discussed separately.) Art’s ultimate concern, the proverbial “meaning of life,” crystallizes around the artist’s confrontation of death. Like growth, meaning is attained through suffering. For Wagner, reconciliation with death was only possible through the redeeming power of love, and this is the leitmotif of every one of his mature music dramas, from The Flying Dutchman to Parsifal. In Poe’s stories, it is not so much redemption through human love as it is transformation through trials. Love of life experience supplants love of the beloved “other.” Poe’s narrator weaves these strands together as his story moves towards its open-ended conclusion.

To conceive the horror of my sensation is, I presume, utterly impossible; yet a curiosity to penetrate the mysteries of these awful regions, predominates even over my despair, and will reconcile me to the most hideous aspect of death. It is evident that we are hurrying onward to some exciting knowledge – some never-to-be-imparted secret, whose attainment is destruction.

This is "only" dark and brooding Gothic romanticism if taken at face value, which is why close reading is essential for an authentic appreciation of real literature. Poe's narrator eerily demonstrates the open curiosity that is a prerequisite for expanding both the mind and the soul. The “secret knowledge” and the “penetration of the mysteries” are motivating forces behind the esoteric traditions. The abstract nature of music makes it an ideal vehicle for transmitting such elusive power. Even within the specificity text imposes upon music drama, this strange force stirs like a phantom, speaking that “never-to-be-imparted secret” for those with ears to hear.

Of course, one can always shut one's brain off and just be entertained.

Posted by Scott Williamson at 12:35 PM 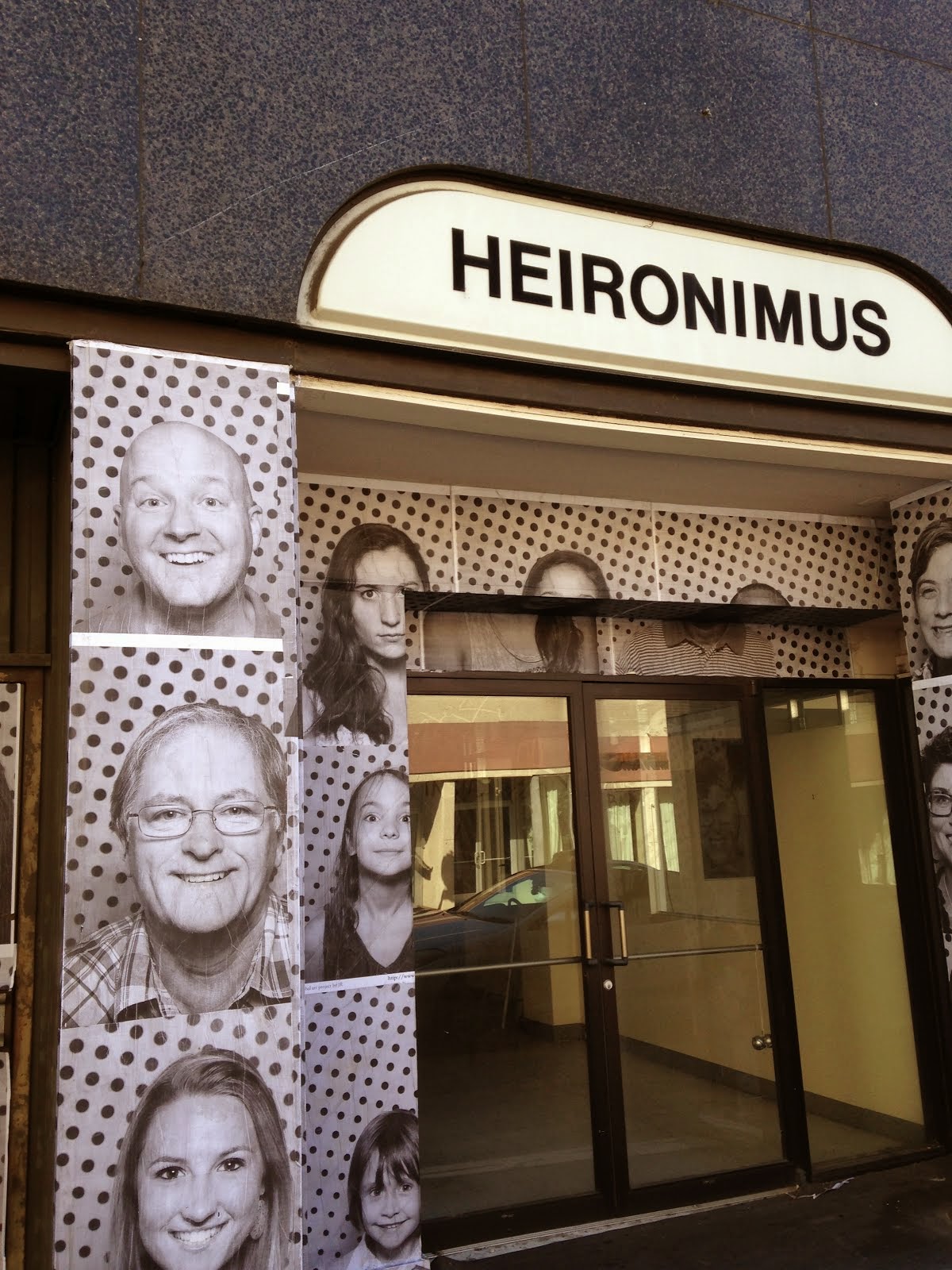